We're back after a four month blogging hiatus, and what a whirlwind these past four months have been.  We started casually talking about moving, with hopes of finding a new house in the next couple years before Anna starts school.  We thought, why not have a look at a few houses?  Who knew that in our first DAY of visiting houses that we would find the one?.  Apparently, we're the kind of people who take three years to buy a couch, but one day to buy a house.

The harder part was/is selling our old house.   First we had to prepare it for staging.  This meant removing 75% of the furniture from the house, though really that meant removing 100% of useful furniture and leaving only decorative display tables and wicker baskets.  Then our realtor hired a professional stager.  The stager continued on the theme of rendering the house unlivable by replacing kitchen appliances with fake orchids and placing breakable knicknacks in low places.  For an entire month, we had to pull the coffeemaker out of the oven in the morning and go to the garage to toast bread.
This was all while going about daily life with a toddler, who has an affinity for scattering toys to the farthest corners of the house, and a baby, who insists on feeding herself and does so with exuberance.  Every morning, the beautifully staged house would last about 10 minutes before being returned to its natural state.  Whenever a realtor would call wanting to show the house, I would fly into a cleaning frenzy while the kids attempted to undo my efforts.  Did I mention that they were also on totally opposite napping schedules, meaning that any time of day that someone wanted to see the house, one of the kids would have to be rudely awoken from a nap?  If I had known how difficult this whole process would be, I would've said, "Forget it, dream house.  You're pretty great, but this might be the death of me." 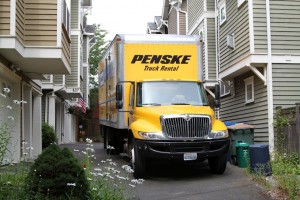 In the end, we survived the house showings (though it's still on the market), survived a nail-biting multiple offer scenario on the new house (thank you, Jesus!), survived a move (just barely),  and here we are.  After the move, Anna told us, "I want to stay here in the new house forever."  We couldn't agree more.
The new house is rife with possibilities and just crying out for projects, so we hope to get some of them up on the blog soon.  First up is putting Tess' room together.  After living in our closet for the first year of her life, she deserves some guilt-ridden overcompensation in the form of a really cute room.